Continuing my quest to have the beers from Two Beer Dudes Oktoberfest, last night I had Point Oktoberfest by Stevens Point Brewery and Moonglow Weizenbock by Victory Brewing Company. 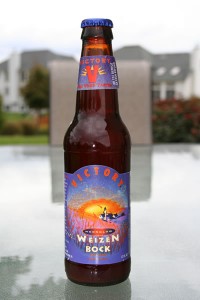 I started the evening off with Point Oktoberfest as I didn’t know what to expect from Moonglow Weizenbock. Point Oktoberfest had the most foam of the Oktoberfest beers I have tried so far but, like the others, that foam doesn’t like to hang out. Aroma of grain, toasty, and sweet malt pleasantly great the nose. The taste followed but was a little on the light side, similar to the body. A clean, crisp, easy drinking beer that would be easy to session. I would recommend this beer to Oktoberfest enthusiasts.

My first Weizenbock, Moonglow, lived up to the standard guidelines of what the style should be. Poured dark amber, cloudy with lots of little floaties and a foam reminiscent of soda pop foam. Aroma and taste are both complex with banana esters, phenols, malt, wheat, and dark fruit. Interesting. air yeezy 2 More foam than any beer I have ever had just add to over complexity and ability to enjoy the beer. I have to admit the style isn’t my favorite but if you are going to try a Weizenbock then Moonglow Weizenbock is a fine place to start.

Half way through the Weizenbock I decided that I needed to have an IPA since I hadn’t had one in almost a week. My last can of Gordon was staring me in the face. I couldn’t do it, I felt sorry for the little bugger. Instead I grabbed a bottle of Curmudgeon by Founders Brewing. I haven’t officially reviewed that beer and I have had four. Time to crack the second four pack and comment on how damn good that beer is. Enjoy!