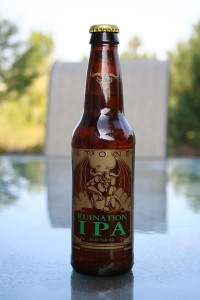 The fateful bottle that hooked up my senses to a blissful evening!

I recently came to the realization that I am officially a hop head. In earnest I have been trying as many American IPAs and American Imperial IPAs that I can get my hands on.

I prefer a well balanced finish instead of some that just leave it out there to prove how much hops they can put in at boil. Nonsense. West coast people may enjoy an over the top bitterness but, to me, why? Oh, don’t get me wrong, if there is some floral, pine, or citrus notes in the after taste or a quick hit of bitterness; that is great stuff. Just don’t over do it.

Last night I set roshe run suede out to have Stone Ruination IPA as it has been in the cellar (using that term loosely) for a couple of weeks. Each time I go down there it beckons me, teasing me into submission. I had had enough and the bottle top came off last night.

The pour was beautiful as the foam seem to be perfect: off-white, thick, and frothy, exactly what I want in an IPA. The aroma was even better, probably the best part of the beer. A perfect combination of pine and citrus notes that played a scintillating tune for my nose. The taste was pretty damn good too. Not as good as the aroma as the bitterness was just a tad too much in the aftertaste. An American Imperial IPA that can finish nicely is something to behold and Stone Ruination IPA comes close.

Stone Ruination IPA is an impressive beer that should be on the top of your list to try. Enjoy!