Tasted: She Doesn’t Sweat Much For A Fat Girl 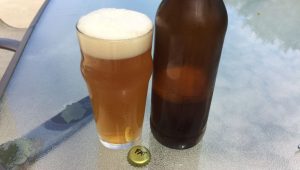 Looking “fat” in the glass.

She Doesn’t Sweat Much For A Fat Girl is the latest stab at a North East India Pale Ale (NEIPA). Since I missed the original gravity but such a large amount, I was worried how the bitterness would be perceived. I was also worried about the potential for booziness. That one is a bit more difficult to explain; how would missing gravity on the low side create alcoholic flavors/aromas. I have used the hops in this beer in the past, even when they had different names, but never in this quantity or together. Therefore the aroma and flavor will be a new and, hopefully, welcomed experience.

Look: Typical NEIPA that I have been brewing over the past year: brilliant, light gold color. Slight haze, less than normal since I took the beer down to 37*F for 24+ hours. An inch of white foam. Slightly rocky as it begins to recede. Great retention and sticky lace.

Aroma: Huge banana. It jumps out before the glass comes to the nose. Mango, apricot, orange, and papaya. Hints of resin, floral and lime. Completely hop forward, minimal malt sweetness.

Taste: Banana is once again the star. Lots of mango, orange and papaya. As it has aged a taste of berries has began. Light malt for balance. Minimal to no bitterness.

Overall: Probably the best nose of any beer I have ever brewed. The banana mixed with other tropical fruits are over the top, making for an enticing aroma. In spite of the huge hop aroma and taste, bitterness is subdued. Easy to drink. Aroma is the star.

My worries were split: one came true, one could be ignored. The bitterness wasn’t an issue at all. The beer was hop forward without a hint of bitterness, still the beer was balanced. I did feel that there was a late bite of alcohol in the taste. Hypersensitivity, real perception or I wanted to find alcohol. Something to continue to think about. The banana hop aroma and flavor was quite surprising based on the profiles of the individual hops. The surprise was appreciated. Enjoy!

Useless Fact: Astronauts aboard the ISS change clothes near a filter that sucks up the skin particles that would otherwise float around.