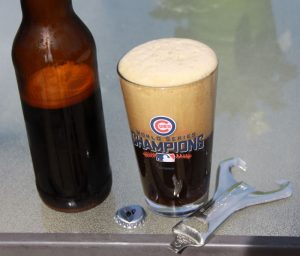 This is the first beer I have ever dedicated to a movie. I might have to come up with one for each of the main characters in the Hangover series. It gives me more reason to have to watch one, two or all three of the movies again. Nothing for me to balk at.

Aroma: A pleasant balance of maltiness and hops. Sweet caramel with traces of chocolate and rye. Orange, grapefruit, and pineapple aromas from the hops. Not overly hopped but pleasant and easy on the nose.

Taste: Like the nose, there is a good balance to the malt and hops. Generic base malt sweetness, chocolate and rye coexist. Orange and pineapple hops start in the middle, adding great balance and fullness to the beer. Minimal to no bitterness, possibly some from the touch of chocolate rye.

Body: Medium body. Tending towards the high end of carbonation. Clean but not crisp. Dries.

Overall: The most well balanced beer I brewed in a while, especially with the amount of hops used. Would brew this again without any changes. Solid beer.

Cascadian dark ale or black ale, which ever you prefer to call it, seems to have been a fad. I brewed one, since I hadn’t had one in a long time to see if I could revive the dying breed. As I mentioned, I would brew it again, but when? Friends don’t want to take it so having to hit up five gallons on my own in a timely manner is almost impossible. Enjoy!

Useless Fact: The poorest 5% of people in the U.S. are still richer than 68% of the world’s inhabitants.