Brewed: For the Little Woman 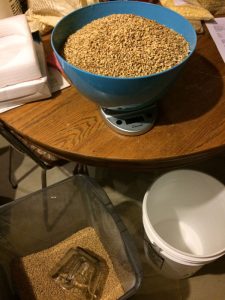 I couldn’t find a definitive clone recipe for Spotted Cow, even after talking/researching at the local home brew shop. I did gather enough to know what I needed outside of the norm:

Base malt, cara-pils, and S-05 yeast are always on hand. Some of the recipes also called for flaked barley. I decided to drop that for a bit more flaked corn. The only concern I have for 12.0 ounces of flaked corn: too much corn, yielding an almost popped corn and/or corn cereal flavor/aroma.

The total of the flaked corn used in this recipe was less than any total of flaked corn and barley combined as well as, there were a couple of recipes approaching this much flaked corn as well. Still concerned. It will be a simple fix if the corn is too strong: use less corn.

Home Brewing For the Little Woman

This is a rather simple beer to brew based on my recipe formulation. Using a single ounce of hops in a beer is something I rarely do and brings back memories of when I was brewing many wild/sour beers.

This was one of the most successful/easy days of home brewing I have had in quite some time. Gravity readings were higher than expected. I think I finally have the grain mill dialed in. Thanks to Fred Francis, at monster mill, for his patience with his assistance. Rich joined in to make the time pass quickly as our conversation centered on craft beer, home brewing, and anything similar. Enjoy!

Recipe for For the Little Woman

Useless Fact: Farts have been clocked at a speed of 10 feet per second (7 mph).

Tasted: For the Little Woman