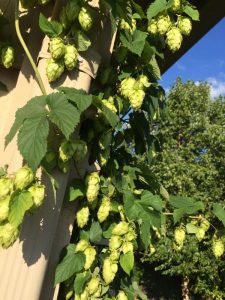 I have brewed with home grown hops in the past. I didn’t really care for the finished product, so much so that I didn’t even make an entry into the blog. I recall heaps of vegetal taste that had been extracted into the beer. Unpleasant at best.

That first, and only attempt, I used the hops as late kettle additions: 20, 10 and 1 minute. I wanted to extract cascade flavor and aroma. Unfortunately, I only remember the greenness. That one brew has scared me away from using my home grown hops since.

In the meantime, I have dug up two of the plants (Mt. Hood and Centennial) leaving me with Cascade and Willamette. The two plants I dug up were do to low yield due to poor yard placement. The remaining two have produced okay crops but I have always come up with a reason or three, to the wife and quietly to myself, on why I didn’t have time and/or couldn’t use the hops in a particular season.

This season I noticed that I was getting a good crop of both Cascade and Willamette. I had to do something with those hops. I needed to gain merit with my wife for not wanting to dig up the last two plants. She would replace them with flowers in a heart beat.

What to brew and how to use the hops were my biggest and only questions. Trying to coordinate an optimal time to pick and have time to brew was up there as well.

Countless of hours of thinking about brewing while on one of my two daily walks yielded:

I had come up with the perfect plan. Now I only had to perform. Never an issue. 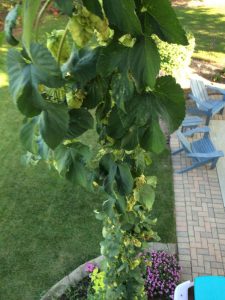 On brew day, I picked the Cascade and Willamette hops. The amount of Cascade filled a 6 gallon bucket half way. I have no idea how much it weighed but I know it was a shit-ton of hops. The Cascade was full of hop oils and huge on aroma: my hands were green but had the aroma of fresh cascade hops. Better than any crop previously. Knowing that wet hopping with that amount of hops would soak up huge amounts of wort, I decided to not use the Willamette. RIP Willamette. It was discarded. Next year I will plan Labor day weekend as a double brew weekend to use up all the home grown hops. The second beer I would brew: a saison, using the Willamette hops late in the boil and/or as a whirlpool hop.

If the beer tastes half as good as it smelled while brewing, this will be a winner, even with the wife. Enjoy!

Useless Fact: Trees “talk” by exchanging chemicals. They communicate through underground fungi, and when they can recognize their relatives, they share nutrients. Basically, tree “families” help each other out.