By scot in Home Brewing on Saturday, September 8th, 2012 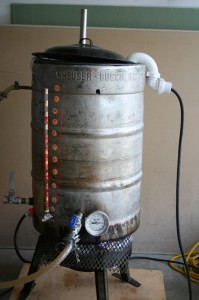 It is hard for me to believe it has been almost four months since Chuck and I brewed our first round of Duck Hook IPA beers. Chuck will be a father for the first time in about a month; my windows of brewing opportunity are going to dwindle for these “dual” batches. Two different hops were selected: Rakau and HBC 342. I have never used either of these hops, so, outside of reading online information, have no clue what to expect (citrus aromas are filing the fermentation closet).

Before I continue on, a quick note about the Citra and Nelson Sauvin from the first go around: citra is gone and Nelson has about sex bottles left. It is definitely past prime but the base beer holds up.

The recipe was exactly the same as last. I expected another great day of brewing as the first day went off without a hitch. Unfortunately that wasn’t in the cards. There were several issues:

There is one thing I will take from this second double batch brew, besides the beer: having my family around during this long brew day is not advantageous to my appreciation of the day. Getting breakfast, snacks, and lunch requests didn’t allow me to concentrate fully on the day. This could be a factor in a few small near mess ups I had throughout the day. Enjoy!

2101209-30: Bottled both beers (unfortunately I have to wait two weeks) with four ounces of priming sugar in two cups of water.

Useless Fact: A cat has 32 muscles in each ear.