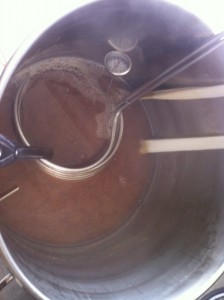 I brewed my first batch of Duck Hook IPA last year. The line of beers is an ode to an individual hop each time I make the brew. I use 4.0 ounces of one hop: usually 2.0 ounces make the boil and the other 2.0 ounces are used for dry hopping. The day also included Chuck lugging his brewing equipment over to brew up a double batch, each with a different hop.

I have to admit that I made the beer so many times last year that I sort of lost interest: same base profile every time got a little stale, along with the fact that a few of the hops I used didn’t excite me all that much.

Fast forward to now: it has been more than a year since I brewed up a batch of Duck Hook IPA, I recently purchased some Kohatu hops, Pat tells me they are fantastic, time to play!

I used the base recipe that I have all along, I just changed out the regular wheat malt for non-malted wheat. It was a left-over from another brew day. The brew day was fantastic. I brewed on a Friday, as I took a vacation day (was originally to be used to go to Darkness), this means that I was at home alone. No kids, no wife, just my thoughts about brewing and a home brew or two to enjoy during the process. These factors allowed me to hit all my numbers while start to finish, inducing clean up, took a mere five hours. Enjoy!

Useless Fact: Dr. Dre has made more money making headphones than he ever did making music.