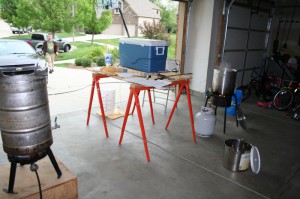 I was a bachelor this weekend. The wife and kids were out of town (and sorely missed) for the entire weekend. What to do? I got it: home brew! What to brew was a simple question. Saturday brew an Americanized Belgian Wit for the wife and, Saturday, brew up two IPAs. Each with the same base but highlighting a different. In this case Citra and Nelson Sauvin.

The trick with the double batch of IPA on Sunday was having enough equipment and not having a brew day that was more than 8 hours long. Chuck was willing and able to lend a hand, bringing over a burner, kettle, chiller, and a couple of other pieces of equipment. The plan was to get one batch boiling while starting the mash for the second. It was determined that Chuck and I would have to be doing different tasks from each other throughout the brew day in order to pull this off cleanly. For example, while one is chilling the first batch of beer, the other could be doing the sparge(s) on the second batch.

With both of the IPAs I did a first wort hopping, which was a first for me. Chuck had been doing for while but I wanted to make sure of the level of bitterness from that practice before jumping in (ever the cautious brewer). The aroma on the Citra version while chilling the beer was utterly fantastic (we chilled it in an enclosed area). The Nelson Sauvin version wasn’t as aromatic but this was chilled in the garage with the door open and a slight breeze. 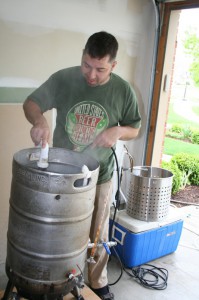 We didn’t hit the expected gravity from the brew sheet but the gravity of both beers, pre- and post-boil, were exactly the same. At least I know my process is the same.

Unusual for Chuck and I as the day did go as planned. Ridiculously simple and clean. We were done with both beers in seven hours (two five gallon batches), including clean up.

Returning back to Saturday: Grass Cutter Wheat Ale was the brew of the day. This is a beer I have many times in the past, less so recently. The wife has taken a liking to an American Pale Ale that I brewed, asking for it rather than the wheat. I guess she was in the mood. This beer uses 0.3 ounce of freshly ground coriander and the fresh zest of two oranges. Like I mentioned an Americanized wit beer: the ingredients and yeast are all American. Outside of the boil pushing my post boil volume to under five gallons the day was a success.

During the brewing process of Grass Cutter, I also racked Double Bogey to secondary. It has already been a month since I brewed it, so it was time to move into a clean carboy and the 60 degree chill of the basement for a few months. The gravity reading put me at 1.022 which should put this beer on the done side and potentially the dry side. Enjoy!

Useless Fact: Penguins can jump as high as 6 feet in the air.