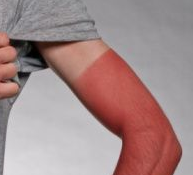 It has been a while since I have come forth with thoughts on a brewing day. Rich recently mentioned his first brew day with me, which I affectionately named Rich’s Bitch. Since one of my New Year’s resolutions is to brew more and talk about it here, here we go!

Whenever I decide to brew a new style of beer, I do my homework. I check out BJCP guidelines and then scour the web for recipes. I decided that I needed some type of brown ale in repertoire. After reading the style guidelines for an American Brown Ale, I knew it was my type of beer: lots of hops.

After a week or so of screwing around, I settled on the following recipe:

Looking at the recipe I think I might have too many different grains, especially with the Wheat, Cara-Pils, and Victory combination. Based on what I wanted to achieve, I think there is some over lap. Once I bottle, I will know for sure.

The brew day went smooth. I was joined at various times by Chuck and Dave, sharing some home brew with each made the time pass quite quickly. The beer was busy fermenting this morning. I should be trying this one out in about a month. Enjoy!

Useless Fact: The Mexican fishing spider attaches itself to a small leaf, floats across a pond as if on a raft, and from this vantage point hunts its prey, large tadpoles and small fish.