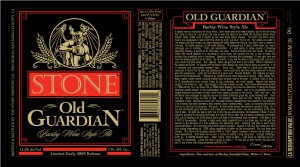 I called off the usual Thursday night get together at my house because I wasn’t in that great of a mood. I did this right around lunch time. As the day wore on, I realized that I needed an American craft beer or three and would appreciate shooting the shit with someone. I immediately got in touch with Rich and he was game. It had been a couple of weeks since we got together anyway so most of conversation centered around what we had been appreciating in the American craft beer world and what we would like to do in the short term going forward. We only had a couple of beers as Rich has a lot of driving to do and I had had a long day.

Since I will be brewing an American barleywine this weekend, I have been focusing on that style this week. I thought I was done yesterday but out of the cellar bubbled Old Guardian 2009 by Stone Brewing Company to become beer number 345.

Old Guardian has huge toffee and caramel notes with touches of fruits. Alcohol can be found but is minimal. I thought this was a good barleywine but there was something in the aroma that I can’t put my finger on that didn’t completely agree with me. I couldn’t come to a conclusion if this beer would be better fresh or with a bit more legs on it. Enjoy!

Useless Fact: It takes the human eyes an hour to adapt completely to seeing in the dark. Once adapted, however, the eyes are about 100,000 times more sensitive to light than they are in bright sunlight.