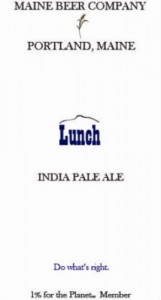 American craft beer transactions are the best way to get American craft beer that you normally can’t get your hands onto. Finding someone on the other end that you can count on, creating a relationship of “friends” without every meeting them is bliss. I am fortunate that my transaction buddy in Maine, Matt, have created such a relationship. It is nice to receive a package that you never even knew about, especially when it is full of crazy goodies.

I have had three other American craft beers, via Matt, from Maine Beer Company. All three have been well above average and high on my list of “have again.” This time something knew was in the box: Lunch an American IPA.

Lunch might come from the east coast (actually about as far east as you can get) but the hop profile of pine and grapefruit citrus quickly make your senses think back to all those wonderful west coast IPAs. Well balanced, easy to drink, and refreshing with only a slight bitterness, this beer was fantastic after a day at the pool.

Thank you Matt for another great beer and kudos to Maine Beer Company for hitting four for four on their beers. Keep up the good work. Enjoy!

Useless Fact: Toward the end of her life, Sarah Bernhardt had a wooden leg and often wore it on stage. The “Divine Sarah” slept in a coffin, owned her own railroad car, and played Juliet when she was seventy.