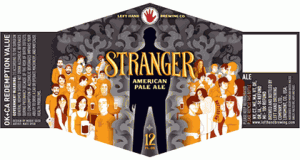 This weekend was the third in a row that I brewed. This time I brewed up a batch of a honey pale ale. After my brew day was over, I headed over to Chuck’s as he was brewing up a batch of beer himself, where I had American craft beer number 243.

Stranger by Left Hand Brewing Company is an American pale ale (APA). Grassy hops are the strongest of the hop profile while light sweetness and bready malts make up the backbone. The beer is on the lighter end of the spectrum and a bit refreshing.

A good offering for the style with many much more preferred to the style I look for in an APA: a bit more hop aroma than most. I would have it again. Enjoy!

Useless Fact: In ancient China, towns were often arranged in specific patterns so that if seen from the air the whole community resembled an animal or symbolic design. The city of Tsuenchen-fu was built in the shape of a carp. Wung-Chun was laid out in a shape of a fish net. Other towns were arranged to resemble snakes, stars, sunbursts and dragons.