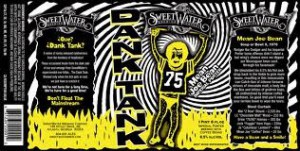 Since I hear your mental thought of “Why?”. I will gladly expand. As I have said many times, I believe a beer should be well balanced. A well balanced beer will have subtle complexities that make the beer inviting, warming, and for want again. Brewers that make beers big and obnoxious to draw attention to themselves, seemingly narcissistic: “Hey, look what I can do. Everyone look at me.” Unfortunately these seem to be the beers that get most of the attention. After all isn’t it “American” to bigger, badder, bolder? No time for politics.

Dank Tank Mean Joe Bean by Sweetwater Brewing Company fits into that well balanced category. It uses coffee or some form of it to add a subtle complexity to a solid porter that is still the overall focus of the beer. The coffee adds a layer to the beer and doesn’t become the beer. Well done and worth your attention. Enjoy!