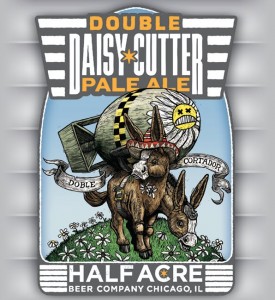 Thursday night brings out the quality American craft beers in droves. Last night I supplied the beer from a recent transaction that netted me a bunch of west coast, specifically Oregon, IPAs. We wanted to try them together and have the entire crew together to taste: Rich, Steve, Chuck, and myself.

The NCAAs were on, so the night lasted longer than usual, with me eventually pulling Consecration by Russian River and Barrel Aged Blackout Stout by Great Lakes Brewing Company up out of the cellar to keep our palates happy and amused until basketball was finished.

Both of those beers are crazy good but the earlier IPAs were more hit and miss. It seemed that several might have had a bit of age on them and the supposed large hop profile became merely an after thought to a beer that was more malt forward. Some had fallen so badly that the beer became quite resinous.

Double Daisy Cutter by Half Acre Beer Company was the first beer of the evening and is actually out of Chicago as I thought it would make a good warm up beer to those “big” west coast IPAs. To be honest, it was the best IPA on the evening, beating those west coast flunkies to a pulp. 😉

Double Daisy Cutter has only been brewed twice, that I know of, I am hoping they will brew it again and again and again. If they do I am going to try and grab more than a singular bottle in the future. Outstanding stuff. Enjoy!

Useless Fact: The cruise liner, Queen Elizabeth II, moves only 6 inches (15 cm) for each gallon of diesel that it burns.