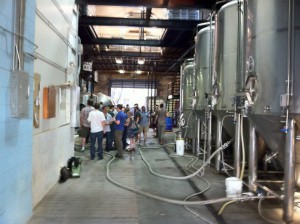 I have heard of a meetup but never a tweetup. When Rich told me a week or so ago to sign up for a tweetup over at Half Acre Beer Company, I googled the term to get an idea of what a tweetup could be. I have to admit that I was skeptical: was this going to be a bunch of twitter nerds that think they know something about beer?

Rich picked me up from work and we headed for Half Acre, arriving shortly after go time: 5:30pm. There were 15 or so people already at the event. I recgonized no one, nor did I expect too. Around 6:00pm, Gabriel, the owner of Half Acre, welcomed everyone to event. He continued that the entire staff was on hand to answer questions, give tours, that the entire brewery was open, and all the beer was on the house. Yep, that’s the Half Acre mantality that I have grown to appreciate in their time on the Chicago scene.

A version of Over Ale that had been aged four months on rye bourbon barrels and never releasesd, was on tap. Others included Chocolate Camaro, The Hammer, The Bullet & The Vise, and Callow Knife. Chocolate Camaro was a very seasonable stout (<5%). Call Knife was a seasonable American Pale Ale that had nice addition of Citra hops. 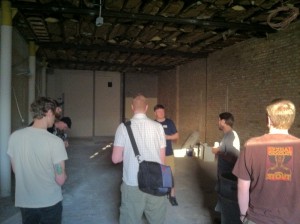 During the brief opening talk, Gabriel talked about the addition of a brew pub that was in the works. The space joins the brewery on the other side of the current front-end area and is only on the clearing out end stages. They would like to have the space open for customers in July but understand it could be much later this year.

It was nice to see and talking brewing with Bryan Shimkos. He is a great guy and always has time for us beer geeks.

All-in-all my first tweetup was a blast: meeting some local beer geeks, having some quality beers, learning more about Half Acre, and, most importantly, the gracious hosts and staff members of Half Acre. I am looking forward to the next. Enjoy!

Useless Fact: Spiders never spin webs in structures made of chestnut wood. That is why so many European Chateux were built with chestnut beams—spider webs on a 50 foot beamed ceiling can be difficult to clean!