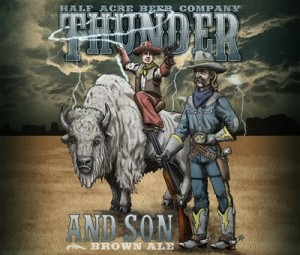 Half Acre Thunder and Son

Thursday night: another night to converse about the Two Beer Dudes website over a few beer reviews. What, no Rich? No problem. Chuck, a home brewing buddy, filled in and instead of conversation about TBD, it lead to the expected place: home brewing. It is getting close to that time for purchasing hop rhizomes and, in spite of Chuck having 18 or so plants in his yard, I was wondering if was going to get more. I only have one plant and the wife gave the go ahead for at least one more this year. My dilemma: I would prefer Citra or Amarillo hops. Both are not publicly grown hops, therefore their rhizomes are not available either. Now I am hoping Chuck has to cut back a few rhizomes and that might be the way I go. More to come on that topic as we move towards spring in frigid Chicagoland.

Meandering through the tangled talk of home brewing was the banter about the American craft beers we were appreciating and reviewing. We only got through two beers last night, both above average, with beer number 58 shining brightest.

Thunder and Son by Half Acre Brewing Company is listed as a brown ale on the bottle but really falls into the American strong ale category. Fruits abound from this beer, both in the aroma and the taste. Not just dark fruits, but some lighter fruits, middle of the spectrum and definitely not tropical. They add this nice balance to the beer that hides the high alcohol well in the taste but it blurts out in the aroma. A little age on this beer, it could be wonderful. As it is now, it is a solid offering. Enjoy!