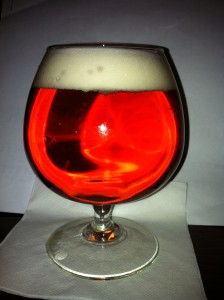 It isn’t often that the wife and get to go out and appreciate a few, quality American craft beers. The day was long with painting, running around but baby sitter showed up, we were ready for a few hours of freedom. We went to a local bar, that I had called earlier to see what was on tap. Double Jack by Firestone Walker Brewing Company was flowing. I had heard good things about this beer. I needed my piece of the pie.

Once we arrived my wife said that she wanted something bourbon aged. Got to love that in a woman. The only thing on the menu that fit the request was Dragon’s Milk by New Holland Brewing Company. Unfortunately, for my wife, she thought it would be prudent to throw back three of those in a matter of a couple of hours. Yuck describes the rest of the evening for her.

Double Jack is something special. It is that simple. Pine is the foremost in the character of this beer. Citrus and malt sweetness are there also. The mouth seems to add a bit of mangoish flavor that leads me to believe Citra hops might have been used. The big alcohol is well hidden, dangerously so. I could have this over and over again. The bar tender did tell me they were getting three more barrels of this fine nectar. I will be back. Enjoy!

Useless Fact: The first toilet ever seen on television was on “Leave It to Beaver.”