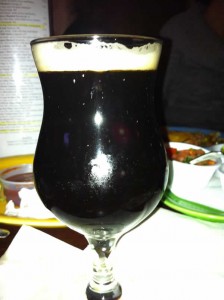 Yesterday marked a work held happy hour at Jak’s tap near our office. I have been there several times (I have to write them up on the site) and they have a nice American craft beer tap list as well as some Belgians. A nice surprise that includes some quality food including fish tacos that are outstanding. So when it was announced that our happy hour (actually two) was to be held here, I knew I was going to have at least one quality American craft beer.

Trout Hop Black IPA by Grand Teton Brewing Company was the main event for the evening. As I perused the beer menu, I noticed the black ipa and, knowing I haven’t had many, but have been fond of them, I decided that was my target. Also, in my deciding factor was that I have had some Grand Teton beers that have been half way decent in the past.

The beer pour was nice: a tulip glass with a nice creamy, thick, tan foam that would coat the glass the entire drink. Aroma and taste were similar with a touch of sweet but balanced by both roasted malt and citrus orange hops. The body was creamy with mild carbonation. I had a different beer after this (Stillwater Stateside Saison) but in hind site should have had another Black IPA as I took fancy to it more. Enjoy!