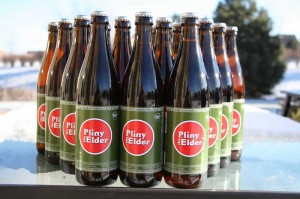 American craft beer at its’ finest: Pliny the Elder (PtE) by Russian River Brewing Company. Before my first PtE, I had heard great things about, especially how wonderful this beer was wile it could quite possibly be the best DIPA in the United States.

Once you start getting into American craft beers, these type accusations peak your interest. I was fortunate to land this beer handful of times in 2010, never securing more than two at a time. Once obtaining, tasting, and reviewing, I quickly became a believer that PtE is, if it isn’t the best, in the team photo for best DIPA.

Occasionally I have received some PtE from my cousin whom lives in southern California but it was sporadic at best. A week ago he informs me that he has a basketball tournament in Norther California and wants to stop at that brewery I am always telling him about. Yeah, must be the life.

The next thing I know I am getting a phone call stating that he has secured an entire case of PtE!!! Holy crap Batman. One of his fellow coaches wanted six of the eighteen beers, which was fine with me. I had 18 PtE en route. Yum!

If you have the capacity to get this beer, do yourself a favor and obtain it. You may not agree that it is the best DIPA in the land, but there is no denying that it is in the top five and, for a DIPA, is one damn easy drinking IPA. Enjoy!

A couple of pictures of the complete Pliny the Elder haul: 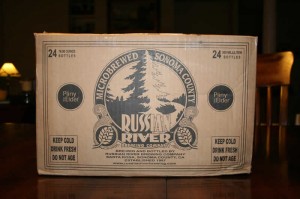 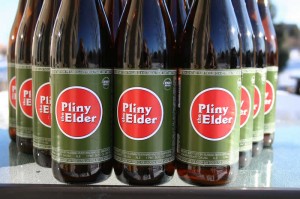