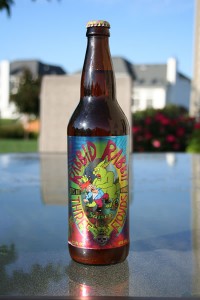 Next to New Glarus Brewing Company, Three Floyds Brewing Company are the breweries beer that I have tried the most different beers to this point, officially. They are both close by, both make some good beers, and both make beers quite different from each other.

Rabbid Rabbit by Three Floyds Brewing Company is a saison with a twist, like most of their beers. zx 630 They added one of the strangest candies of all time to it: pop rocks. The complex beer starts off with fruit, spice, sweet, and a touch of yeast on the nose. The spices are clove and pepper. The taste follows closely. The straw colored brew is light in the mouth, contrary to the big, complex taste and aroma. Very drinkable but the sweetness, probably from the candy, seems to overwhelm at times. 7/10

One lonely bomber of Rabbid Rabbit is all I could review last night as the snow caused some nasty travel times and I lost myself in the sixth Harry Potter movie with my wife and kids. Enjoy!