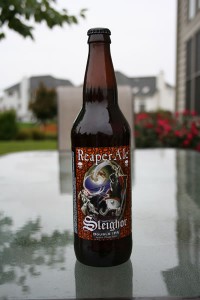 To be honest Sleighor Double IPA by ReaperAle Brewing Company wasn’t a beer that I was looking forward to reviewing. My cousin was nice enough to pick this one up for me without me realizing I can get it locally and I have passed on this brewery many times. I don’t know if it is the reaper scenes on their beers or their over the top Halloween cartoonish site. Either way, I knew that this had been in the basement for over a month and that it was a hoppy beer, Air Jordan Femme so if it waited much longer I might not be able to taste and review at optimal experience.

So Sleighor Double IPA made my single list of reviews last night (I also threw back a Bellaire Brown by Short’s Brewing Company but I have already rated it). Sleighor poured beautifully a nice dark amber, slightly cloudy, with a ginormous amount of sticky, frothy foam. The aroma and taste both had sweet malt balanced by a trio of hop scents/flavors: citrus, pine, and floral. Floral was the strongest giving the beer a clean, springtime type feeling. The big alcohol was slightly present in the nose but not in the mouth. A full body and complimentary carbonation with a bit of creaminess. A really good American craft beer and American Imperial IPA. 8/10

Although the review list is as short as possible last night, one, the one bomber more than satisfied. Enjoy!