Last night the two lucky guest stars were Bell’s Octoberfest by Bell’s Brewery, Inc. and Founders Harvest Ale by Founders Brewing Company. I am a little better than half way through the beers from Two Beer Dudes Oktoberfest gig. 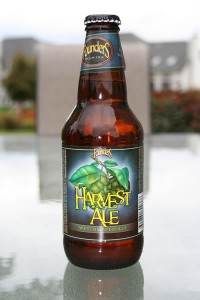 Bell’s Octoberfest by Bell’s Brewery, Inc. was first as I believed I would be in for a treat. I can’t say that I was completely dissatisfied by this beer but it didn’t live up to what I have come to expect from Bell’s Octoberfest by Bell’s. air max 90 Aroma and taste are of an average lager, nothing spectacular. I would have it again but wouldn’t be my first choice for Oktoberfest.

Founders Harvest Ale by Founders Brewing Company is an outstanding beer that can be easily enjoyed this time of the year. A large amount of hops is blended splendidly with malt as not to create much bitterness or after taste. Another beer that will makes it onto my annual purchase list.

Maybe ten more beers to review. I have to say my palate will be looking forward to a change of pace away from all the spice and malt. Enjoy!