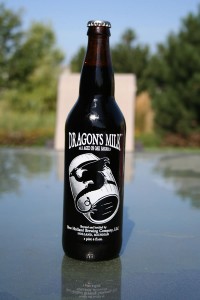 Beer stores visits make Wednesday’s go by fast. Today has been no different but I guess it has slowed down since the anticipation is building for a chance to start tasting tonights addition: New Holland Brewing Company Dragon’s Milk – Ale Aged In Oak Barrels.

There was plenty to choose from as my favorite air yeezy 2 femmes liquor store had received not only their usual Wednesday shipment but beers from a closed store in the south Chicago Loop. Of course I had to inquire if this meant doom for their location but Travis quickly calmed my nervousness.

I had three other beers besides Dragon’s Milk in my hand while we talked about everything they received this week and Oktoberfest and Pumpkin beers. I finally caught of whiff of fiscal sobriety and put everything else back.

A successful trip on two accounts: got an outstanding beer and slowed drain on the pocket book. Look for the review coming soon. Enjoy!