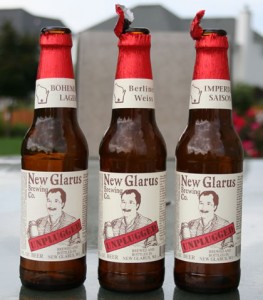 New Glarus Brewing Company is one of my favorite breweries. So it was with great anticipation that I decided to go unplugged last night. Going with Unplugged Berliner Weiss, Unplugged Bohemian Lager, and Unplugged Imperial Saison.

The Berliner Weiss and Imperial Saison were outstanding. I thought both did a great job of sticking to the style. They also were just damn fine tasting and eye appealing beers.

I don’t want to say much about the Bohemian Lager since I believe I had a bad bottle. air yeezy 2 I read what the site said about the beer and the bottle, but couldn’t find the aromas or flavors that should be associated. I actually didn’t finish the beer but would enjoy trying another.

I have tried 11 styles of New Glarus Brewing Company beers and have enjoyed them all. I have another six to be reviewed and I can’t wait. Enjoy!