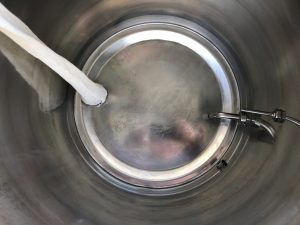 Lack of Focus is a description of how I feel when it comes to home brewing. I go through periods of time where I am laser focused, not able to find enough time to brew all the ideas that are floating around in my head. These periods, with home brewing, typically last for months on end. Unfortunately, I recently have lost that focus. I no longer have an edge for home brewing. I need my mojo back!

I decided to spend some time cleaning my brewing kettle with steel wool. As you can see in the picture, it looks brand new. It sparkles. The trick is to clean it well after each use, rather than letting crap accumulate.

Formulating the recipe for Lack of Focus

Staying with Northeast India pale ales, I decided to try another first: oats and wheat. I am trying to get the hazy but glowing orange color that off the shelf NEIPAs display. Searching other recipes led me to the wheat and oat combo.

Over dry hopping could be a good cause for the lack of glow. I am begging to believe I have so much hop trub in suspension that it fights off the glow.

Staying with my lack of focus theme, I forgot to cold crash this beer. I also added all ten ounces of dry hops at once. I was thinking of splitting them between primary and true dry hop but my schedule got the best of me. I threw them in together. Too much hop material without a cold crash. The beer was soupy, green. I should have paid more attention to the process. 24-48 hour at 37*F would have dropped it clean. Instead, I poured it out. My first drain pour of a non-sour beer in brewing career. So many first. Enjoy!

Recipe for Lack of Focus

Useless Fact: Peanuts are one of the ingredients of dynamite.