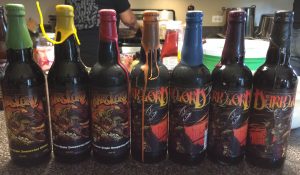 2010 was my first Dark Lord Day. It was an unbelievable experience. Mayhem ruled the day. Pushing, shoving, and trickery were all on hand to help an individual get beers. In that day gone by, one person could use two tickets and each ticket warranted eight bottles of Dark Lord at $15 each; as long as there was enough beer in the first-come, first-serve process. I remember people showing up without tickets in case there was still Dark Lord left after a certain time as it was opened up to walk ups. I ended up with 16 bottles of green waxed Dark Lord, trading many of those bottles away for beers long forgotten.

Fast forward to 2016. The event is bigger: more bands, more people, short release barrel variants, and more drunks, but, the chaos and my love for the event (I didn’t bitch about 2016, I was too tired) has faded.

Needless to say, I haven’t traded nor drank many of the Dark Lords in the last 2 to 3 years. But, I have wanted to do a vertical with the Thursday Night Beer Club (TNBC) for quite some time. The biggest challenge was getting the guys together, with the beer and designated drivers for everyone. No sleeping at my house.

I came up with the idea of a midday get together, on a Saturday, with food shared by everyone, including the wife, mistresses and kids. We also needed to get at least seven guys. Chuck and Matt, TNBC guys, couldn’t make it, that means we needed three other participants besides Rich, Steve, Pat and myself. Ask thy friends and neighbors. We landed Miles, Drew and Andy. John, Rich’s middle son, decided to join us as well. The main course was brawts from the local meat market. The appetizers, side dishes and desserts were supplied by everyone that attended. 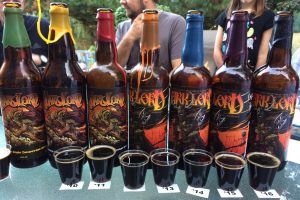 Pat brought along some two ounce plastic cups that I will dub the brightest idea of the evening. It made the seven pours easy, no over pours. It made clean-up a cinch, throw them out. And, it made tastings for others and other beers flow smoothly, no need to clean glasses.

Each person started with their seven pours, one for each year, deciding on the best way that suited them to taste the vertical. Most either started at ’10 and went up or started at ’16 and went down. I chose the latter.

Tasting in such a manner gave me the ability to see how the beer has developed as it has aged. It also allowed me to see how the sweetness really mellows. Dark fruits develop by the middle years, first raisins then changing over to prunes. Coffee was most prevalent in the 2015 bottle, while disappearing in the 2014 and later.

Based on the ratings, see table above, I would say to not drink Dark Lord young, giving it at least two years. I would also say to not go past five years of aging too: the sweet spot, for the group, was by far, the 2012 – 2014 versions. With 2013 and 2014 way out ahead as the favorites. My word of advice: don’t trade away the cellar or, if you are into purchasing, don’t waste large sums of cash on really old (6+ years) Dark Lord.

By the end of the evening, the process of killing a bottle got applause for whomever bit the bullet, with the lowest rated bottles drawing the biggest praises.

Overall, the company, catching up with old friends, and the typical guy banter was more enjoyable than the Dark Lord. I would do it again, especially if the entire TNBC crew could be there. Enjoy!

Useless Fact: A nepheligenous is someone filling a room with tobacco smoke.