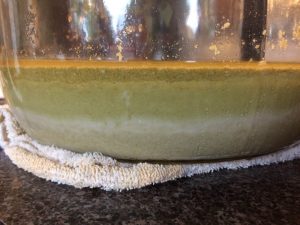 Over an 1.5 inches of trub after my first go around with dry hopping while active fermentation.

Home brewing beers that are named after family members has created an issue: now all my kids want a beer named after them. When the first kid (that I named a home brew after) brags to the other kids, a battle for Dad’s attention ensues. Since my oldest was the most exuberant, Baller IPA was named after her. As I mentioned before, when naming a beer I don’t typically give it the name of the real person but something that reminds me of that person. Thus, Baller IPA, is named due to my oldest child’s affinity for basketball. She plays hard, tough and with a determination that continues to soar in recent months.

Baller IPA is another attempt at a Northeast style IPA (earlier attempts: Smiles and Used). The beer actually started out with intentions of being a double IPA, using some Northeast style hopping processes, while resuscitating an old, friendly on. Alas, it did not end up that way from the standpoint of gravity.

Cracking grain for me can be an adventure at times. The drill that drives my grinder doesn’t allow me to crack the grain as finely as I would like; the grinder binds as the drill doesn’t have the stones to push through the grain to the powdery mist I prefer. Instead, I back off a bit, cutting down on efficiency. The drill, mill and myself did not see eye-to-eye on brew day, more so than usual. The drill/mill bound up, multiple times, making me dump out the grain and clean out any traces before “working” again. Half-dozen times later, I was a bit miffed. I opened the mill spacing to allow for a more coarse grind, alleviating pressure on the drill. 45 minutes after starting the milling process, I was done and hating the mill, drill and anything within eyesight.

The changes to the hopping process was threefold:

The aroma jetting out of the carboy, while racking to the bottling, was impressive. I hope that my milling blunder allows this beer to shine through once I begin tasting. Enjoy!