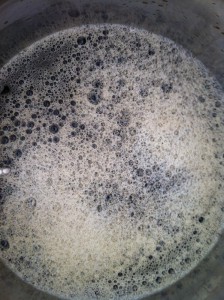 The Belgian Dubbel has been a beer style that hasn’t been on my favorite list. That was at least until I had an outstanding foreign Abbey version several years ago. The beer was outstanding: complex flavor and aroma that were spot on for the style. It made me wonder if a solid dubbel could be brewed in the United States. Also, there was a good chance that my poor early experiences with the style scared me away from trying quality American and foreign vintages throughout those years. In spite of that one wonderful offering I have never brewed the style nor have I chased the style down.

In walks the chance to get some ECY13 – Trappist Ale. I have been jumping at the chance for ECY yeast lately. I didn’t pass it up.

The thoughts of what to brew with the yeast began to jump through my head like thoughts a child has on Christmas Eve. Belgian strongs, dubbel, quad and more were all shaking the cobwebs of my mind. I ending up settling on a dubbel, making a starter large enough to create another starter for a quad in the coming weeks. The recipe was inspired (quite possibly copied from somewhere as my memory is failing at the moment) by similar recipes I found on the internet, putting together an “average” of what I found.

Outside of mildly missing gravity numbers (gravity in Beersmith was set to 83% for some reason) and mashing at 152*F instead of the targeted 154*F, the brew day went well. Rich joined me for the brewing session. We shared several American craft beers and plenty of home brew. Enjoy!