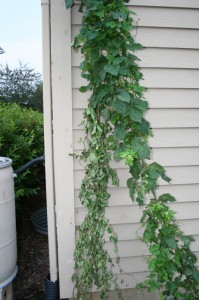 This year has been a stark contrast from the weather of 2012. Last year it was hot, dry and often. This year has only seen a few hot days and even fewer humidity ridden days. The plants have never been starved for water (rain barrel is always full from the frequent rains, down pours and monsoons) but they have never really hit that growth stride prodded by long days of sunlight and heat.

Each of my three plans (Centennial, Mount Hood and Cascade) have had their bouts of trouble. The Centennial and Mount Hood had all three of the main bines nipped during a wind storm a month ago. The Mount Hood has been recovering nicely while the Centennial just is sputtering. The Cascade doesn’t get the same amount of direct sun as the other two and only shot up two bines. One tip was nipped while the other continues to grow and, overall, is the tallest of any bine between the three plants.

The Centennial has had buds already form with many cones formed, some almost full size. All this in spite of being nine feet tall. The Mount Hood is getting bushy, looks really healthy, preparing me for a what I believe will be a great harvest. The Cascade is in it’s first full year in my yard (rescued from Chuck’s hard pan soil of 2012) and will produce mildly at best.

Now the sad news. While chasing a rabbit away from the garden (destroyed the broccoli), I took a quick glance at the hop plants (a daily ritual). I quickly noticed that the Centennial was limp. Crap! A few days earlier I noticed that the rope I used had been severed from an earlier storm at the base of the plant. The plant was only held to the grown via the bines. Fast forward to yesterday: another windy storm hit, cutting all three bines, cleanly, at the base. RIP 2013 Centennial. I harvested a mere 10 cones and, in frustration, through them in the compost with the bines.

Another year and another year of hop growing woes. Hopefully I will still get enough from the Mount Hood and Cascade to make a wet hop beer this harvest. Enjoy!

Useless Fact: There are 45 miles of nerves in the skin of a human being.