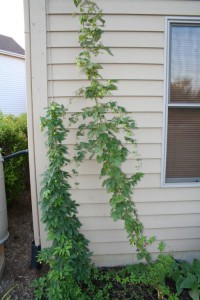 Plane and simple: the hop garden has been for shit. I haven’t been ignoring updating on the progress, there just hasn’t been much progress. To say it has been a roller coaster year for the hops means there are up AND downs. There is no such fun to be had in the garden.

I have three plants: one third year, one second year, and one first year. I will talk about each plant separately as each one has a story.

Centennial, which is the hop plants on the left in the picture, has struggled at best. Last year, it was by far my best hop plant. This year it hasn’t made i past eight feet. It never had a good growing spurt, never had a strong week, and seemed to lag behind from the start of the warm weather.

Mount hood, in the same picture is the hop on the right. Much better than last year. The bines were thicker, stronger, and grew better. That makes it sound wonderful, but it wasn’t. It reached a maximum height of 12 feet, give or take, and had a strong spell in late June. Better than the Centennial but nothing to be proud of. 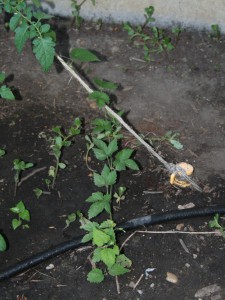 Cascade is the first year midget to the left. The single bine is lucky if it hits two feet in height. This was a rhizome that Chuck gave to me, months after it was promised. 🙂 When I went to his house to pick up, Mr. Green Thumb was ignoring his hop garden (which is in the 18 plant range), the rhizome was dug up, encased in very dry, hot dirt. It didn’t look like it was happy. I knew that I was in for an uphill battle with this plant. I know hops are hardy but I am amazed how well this one has hung on.

There are a ton of factors for the bad year which all center around weather. It started out hot way back in March, which allowed the plants to get a early start. Unfortunately, the frosts in April nipped the tips, creating a period of almost 60 days in which my hops stopped growing and eventually started with new shoots. It took until late May, almost June before the new shoots were back to the level from late March. I thought at that point they would take off but they never did. Even though hot, I watered the plants each days, sometimes in the morning and evening. I did take a vacation in early July which saw each plant have the longest bine snapped by bad weather (at according to the local kid I paid to kill my plants). Mid to late July brought on the Japanese beetles that feasted on the leaves, which, from what I understand, shouldn’t really affect the plant. 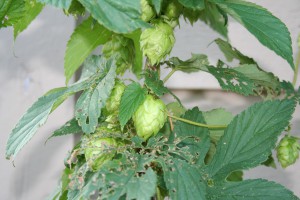 The Centennial and Mt. Hood plants will produce hops this year but I will be lucky to get a half pound between them; I thinking closer to four ounces is realistic. The Cascade hasn’t had the strength to even throw up one flower. At least I know they will come back next year, allowing me to try again. Enjoy!

Useless Fact: Orchids are grown from seed so small that it would take thirty thousand to weigh as much as one grain of wheat.