By scot in Home Brewing on Wednesday, August 1st, 2012 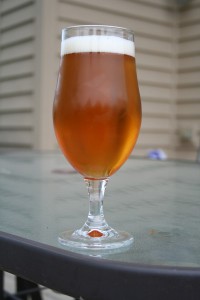 Just like the past few tasting, a tasting of Brett Backspin Belgian Pale Ale has been a long time coming. Brewed back in February of this year, Brett Backspin sat in the carboy for two months and now has been bottled for three months. This was the first beer that I fermented a beer 100% on Brett. I asked a bunch of questions and read a lot of information (typical of my logical self, drives me nuts that I never “wing” something) before this endeavor. The hardest part is wondering what is going in the carboy while waiting, what seems to be an eternity, for the beer to finish.

Some things I noticed:

Look: Clear accents the golden hue with a pure white lacing that doesn’t have depth or staying power. Lacing is sporadic, mildly dotting the glass throughout.

Drinkability: Light body without a question. Carbonation adds a nice elegance to the beer. One of the few times I have dialed it in well.

Overall: The Brett is there but not as pronounced as I would have liked. But as I continue mull this beer over, maybe that isn’t a bad thing. A delicate, yet complex beer has its place. The body is very light. After hearing an interview with Chad Yakobson, I might have to throw some oats in the next batch to hold up the body. That said, this is one light, easy drinking beer.

The next steps here (including some research) will be to determine how to ramp up the Brett profile of the beer. I have to determine if under-pitching the yeast will do, if using one generation old Brett will add more aroma and flavor, if a higher temperature would allow the Brett to be more distinct, if a longer bright tank time is more important to the overall beer than being in the bottle, or if some combination is best. I will definitely only change one thing at a time, so this might take some time before I know the correct combination (more Brett beer to sample, yes!). Enjoy!

Useless Fact: More Monopoly money is printed in a year than real money throughout the world.