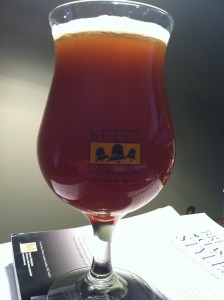 The second beer in the Alpha Acid Aspirations is ready for review: Chunk. Of course I have tasted the beer a half dozen times before brewing. I feel that it is best at this point, as it seems to be peaking.

Look: Pours cloudy (more like opaque) with a couple of fingers of tightly packed, small bubbled, off-white foam that has some quality staying powers. The top stiffens as it recedes, leaving sporadic bits in its’ wake. The beer is a deep amber color.

Aroma: A light malty backbone comes through from behind a shroud of hops. The hops are full of topical and citrus fruit aromas, some floral notes as well.

Taste: Lots of hops in the taste. More tropical and citrus hop flavor tap a tune. Malt is more than a usual for a DIPA. I like the “difference” that is normally not there in a DIPA. The finish is full of hop flavor and bitterness. Bitterness is actually complex: clean (Warrior), rough (Chinook) and some grapefruit (Cascade(?)).

Drinkability: Fuller body than a normal DIPA (seemingly 151*F mash temperature added enough difference to bring up the body). There is a stiff bitterness that doesn’t have much carbonation to hide behind, causing the bitterness to kill the palate.

Overall: Even though this is a DIPA, there isn’t much hiding from the bitterness. The Maris Otter does seem to give a bit more malt base but I don’t think it is enough for the price difference with 2-row. I would brew this beer again but would definitely tone down the bitterness, maybe even remove the Chinook.

This isn’t a beer for anyone who does’t like loads of hop bitterness. I will brew it again but only occasionally. Enjoy!

Useless Fact: Certain frogs can be frozen solid, then thawed, and survive.