2012 Great Taste of the Midwest 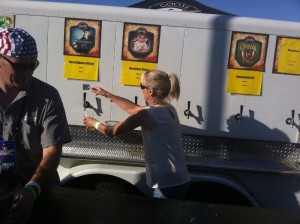 It has been two years since I had a chance to attend the Great Taste of the Midwest. This was a “date” for the wife and I. Perfect.

American craft beer festivals in Wisconsin are different in one major way than their Illinois equivalent: no drink tickets. Yep, the beer fests in Cheese head land have no drink limit (or at least the ones I have been to). By comparison, I have never had my fingers wrapped around more than 15 tickets at one time in Illinois.

Below is the list that I tried (some I had more than once) and in the order tasted:

I would say the most surprising beer of the day was O’so Hop Whoopin. Nice resinous and tropical fruit hop mix that was easy to drink. I had three heaping helpings. A half glass pour of Breakfast Stout reassured me that it was my favorite beer of the day. Vintage Hibiscus Saison was probably Sue’s favorite, which means I might be trying to brew something similar.

Some breweries were already out of beer by 5:15PM, barely more than two hours after the fest began. This was a hang up for Sue. We were in line for Bourbon County Stout when the keg ran dry and the crowd dispersed. Overall I was happy with the beers I tried but don’t think we will be back for a while. The wife mentioned she prefers the American craft beer at FOWBAB much more: rare, short release, and big. Enjoy!