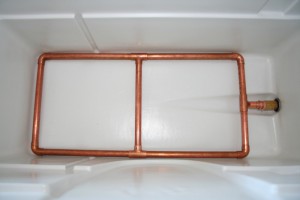 Only brew day picture and of my mash tun manifold????

Home brewing is always more fun when a friend or three is around to share the experience, talk about brewing, and, most importantly, share a few home brews. Steve was in for the entire day as he wants to learn how to home brew. His wife purchased him a brew kit a while back and he wanted to experience a brew day before taking to the task himself. Rich made it over for a couple of hours to share a few home brews. Finally, Chuck meandered over towards the end of the day. He reminded me how his system doesn’t need to be stirred by hand while chilling, which is my least favorite task of the brewing day.

I started brewing much later than normal as Steve couldn’t make it over in the morning. Since this beer was scheduled for a 90 minute mash and boil, I knew this was going to be a long afternoon/early evening. The process went by quickly as the down time was filled with conversation.

I overshot my mash water temperature (since I was conversing) so I had to mix the mash for ten minutes to bring the temperature down to 148 degrees. The only other issue was final volume of wort being about 5.1 gallons and a gravity of 1.058. This is caused by a subpar burner which I don’t have much control over, burns dirty leaving soot on the burner and pot, and is just an overall pitfall of my system. Chilling (stirring) took about 25 minutes with Steve helping out to give a sore arm rest.

The yeast was pitched with the wort at 69 degrees. The plan is to raise the temperature up to about 82 degrees (give or take) to help finish the fermentation process.

The next home brewing session will be a batch of Honey Pot Pale Ale as my wife has been requesting for quite some time. Enjoy!

Useless Fact: A flea can jump 200 times the length of its own body. This is equivalent to a person jumping almost a quarter of a mile.