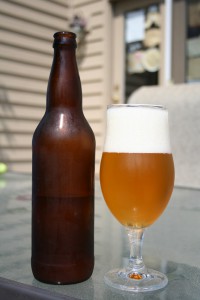 This has been a long time coming: a review of Albatross Saison. I brewed it back in February, yet have never found the time to give this beer the respect I owe it.

This was one of my early attempts at Belgians, more specifically Saisons, one of my favorite styles of craft beer. The first time I tasted this beer I was disappointed. It was only 10 days in the bottle but I assumed that was the final product. I was wrong. Thankfully. Ten days or say later this beer rounded into a great drinking beer, much more than I expected.

Look: Straw color with a couple of inches of pristine white, thick, tightly packed, small bubbled foam. Retention lasts as should be expected with a Saison. Effervescent. Lacing thick, coating the sides sporadically.

Aroma: Pepper and fruity esters are the focus from the yeast (pear and banana). The esters are a touch bigger than the pepper, which is joined by a slight spicy scent.

Taste: More of the same form the nose. Touches of vegetal can be found from the Fuggle hop but I am a hop fan, maybe others might find a distraction (although this went over well at the brew club). Clean bitterness in the finish that is just enough to let you know it is there.

Drinkability: This a really nice drinking beer. Great for the summer. The alcohol level makes it a tough sell for sessioning but is ridiculously well hidden.

Overall: From a beer that was almost dumped after the first taste due to frustration to one of my favorite beers I have brewed; not bad. This will be in my normal summer lineup. The fact that it isn’t hoppy, can age, and get better make this the perfect fit.

I am very happy with this beer and will be having this again (after I try a bunch of different Saison combinations). I have a rye Saison and a rye Saison on brett coming up soon. Enjoy!