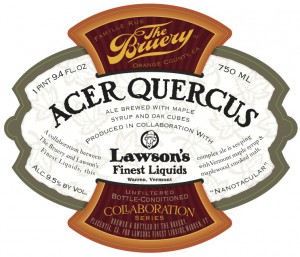 I wish I had more family that lived in American craft beer hotspots that were willing to allow me to appreciate beer from their nape of the neck. Russ, my most excellent cousin from California, is an American craft beer convert and frequently goes out of his way to try new beers while teasing me with photos from his excursion. The good news is there is usually beer for me surrounding those side trips.

The most recent netted me several different bottles of The Bruery beers that I cannot get locally. Because the beers are all in 750ml bottles, I try to wait for a weekend were I have some time to put that much liquid into my belly.

Acer Quercus is a collaboration beer with Lawyson’s Finest Liquids that has been aged on oak cubes. Exactly my type of beer. The 9.5% alcohol weighs in lightly but when you down the 750 in less than 45 minutes, it weighs heavy on your feet tingling. I really liked this beer but thought the aroma could have used a boost. Nonetheless worth your time and taste buds. Enjoy!

Useless Fact: Greyhounds have the best eyesight of any breed of dog.