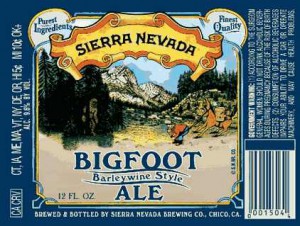 The evening started off with me giving an American craft brewery that I have had in the past but not really enjoyed another chance. It ended with American craft beer number 273 becoming Bigfoot by Sierra Nevada Brewing Company. In between is the story.

Before I go any further I am not going to mention that brewery that wasn’t named above, although their name is comprised of two animals and they consider themselves dark beer specialists. The beer I opened, which I had actually been looking forward to, was an contaminated. The pour was one part beer, 150 parts foam. There was a sour smell and that’s as far as I went. I have had this from them before. I was in the mood for a high quality American craft beer. No exceptions.

That’s where Bigfoot stepped in. An American Barleywine, Bigfoot packs a wallop of west coast hops in the shape of citrus to cut through the big malts.

Smooth for the age (’10) while having enough sweet, dark fruit malts to hold up. Great beer for that occasional barleywine itch that I get. Enjoy!

Useless Fact: In 1905 the Bosco company of Akron, Ohio, marketed a “collapsible Rubber Automobile Driver.” The figure, deflated and kept under the seat when not in use, was a kind of dummy intended to scare thieves away when the car was parked.