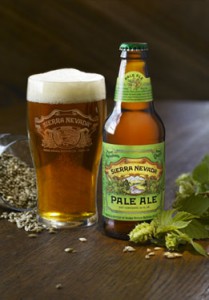 Friday night American craft beer is the pinnacle of nights for me, especially on a hot evening. The beer taste infinitely better because it is not only tantalizing your sense but, and most importantly, satiating the thirst for something cold and refreshing. Pale Ale by Sierra Nevada Brewing Company seemed to be the perfect beer for the evening but let me side track and back track first.

I work in the city and shortly after arriving there was a train crash that pretty much screwed up commuting for the rest of day out of the city. My wife quickly offered to come pick me up. I was talking to a coworker who offered to drive me out part of the way. I immediately took him up on the offer but only if he would allow my family and I to buy him dinner. To Aurelios pizza: my favorite, I grew up on that stuff at the original.

Usually when you walk into a restaurant you are greeted by a burst of cold air, not today. There wasn’t much different between outside and inside temperature, which isn’t good for a guy that likes the air set to sub-zero. In order to cool off I need something as I described above and, as mentioned, Pale Ale was on tap. I couldn’t pass it up. The usual hops weren’t there though, nor was the body, it was bland, tasting like old tap lines. Yeah, I blundered: I tried to buy a good beer at a place that doesn’t do a ton of American craft beer business. Nevertheless it made me much happier and able to deal with the hot atmosphere. Now I am going to get a sixer fresh to bring out the real goodness in the beer. Enjoy!

Useless Fact: Yale was founded by Harvard men. In 1700 ten educators, nine of them Harvard graduates, met in Killingworth (now Clinton), Connecticut, for the purpose of establishing a college. When it was begun, Yale was not known as Yale but as the Collegiate School of Connecticut. Only in 1718, thanks to donations from Elihu Yale, was it given its present name.