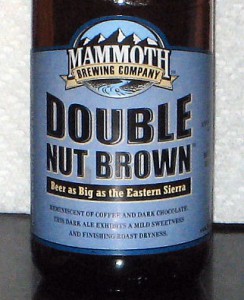 My first vacation beer: Double Nut Brown by Mammoth Brewing Company. After driving 20 hours or more down to Florida, being completed exhausted, and having three hours of sleep while in the car, I needed a beer.

By reading the name for Double Nut Brown I thought it was going to be some type of double brown ale. Instead it is just a brown ale, not that it was a horrible thing, just a touch misleading. I was interested in tasting a double brown ale to see which concoction could be dreamed up for a potential new style.

An average beer or so beer as nothing really makes it stand out against the style. Enjoy!

Useless Fact: The first railroad in America had wooden tracks. It was built by Thomas Leiper in 1809 in Crown Creek, Pennsylvania.