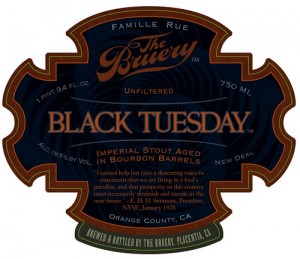 Black Tuesday, by The Bruery, is currently one of those American craft beers that is highly sought after. I have often wondered if I would have in my cellar what it takes to land one of these.

Recently, with the 2010 release, they had a few they were selling via their website after the initial release. I had it all lined up that my cousin, who lives in California, would travel to pick up the beer. Based on what I thought I read on the site, the beers would go up for sale at 9:00pm. What a goof. I was 9:00am, completely shutting me out of a real chance to pick up the beer.

Well last night was TNBC at my house and Mark brought along Black Tuesday ’09. He has been trying to get us to drink it for several months. I guess it isn’t a beer that has to be forced on many. As our last beer of the evening, after a list of big beers, we decided to partake.

The aroma of this beer is special, inviting, and an overall joy for the snozola. Chocolate, almost creamy like, starts off over the top of a blend of dark fruits, molasses, and dark malts. Time spent taking the aroma in for Black Tuesday is time well spent. The taste is right up there to. Each sip brings out another layer of the delectable beer. The large, creamy body seems perfectly placed for this beer too. In spite of the alcohol (19%) it was very noticeable. Just an outstanding beer that I know want again and again and again. If you have the means to obtain one, please do as you will be doing beer consuming senses a favor. Enjoy!

Useless Fact: Canadian researchers have found that Einstein’s brain was 15% wider than normal.