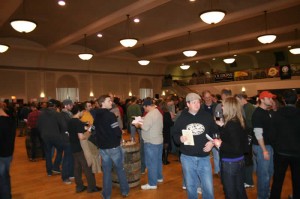 The Festival of Wood and Barrel Aged Beer (FoBAB) for 2010 is history. I was there, so now it is time to put down my thoughts for my first FoBAB. I went with my wife, as an anniversary gift, and met Rich and a few of his friends there. We set up base camp towards the back of the hall and shared our thoughts about the beers we were partaking. The best part of going with your wife: being able to share each of her beers, which easily doubles the amount of beers you could otherwise taste.

A few statistics: 158 beers, 53 brewers, from 23 states. Yep, almost half of the United States was represented.

My ugly mug with Bryan Shimkos of Flossmoor shorly after winning his first of two awards.

The Festival was probably one of the coolest I have been to but it does have its’ short comings. All the beers are listed/grouped by style. I guess you could easily view that as a nice way to present similar beers together, but what about a brewery in which you want to try multiple of their beers. You have to look at the flier they gave you, find the numbers (all beers are grouped on a numbering system) for each beer, then come up with a plan for how you want to attach that particular breweries beers. Not the way I am used to getting at beers. As I said, I can also see their side of this so that if you go and get one bourbon aged beer, you are in the land of bourbon aged beers or the land of sours.

Now, my second and final beef. There are two sessions kept to approximately 500 people per session. This is actually a good amount of people as the hall has just enough space to allow one to move around without knocking into others. You receive 15 or so tickets, which I decided I would ration and make sure I had them up to the end, which was 5:00pm for the afternoon session (1:00pm – 5:00pm). 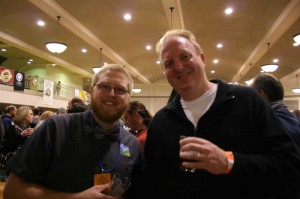 That’s all good but by 3:30pm some taps were already getting shut down; it might have even been earlier. I personally think that is horse shit. How can you shut it down with over 90 minutes left? It made me have to choose beers that I would have never tried if not for this fact. No, most of the beers I felt forced to try, were not that good. This was really disappointing for me. I guess you actually have to burn through your tickets as quickly as possible in order to get everything you might have wanted to try up front. I would have to say this is probably the thing that really kept me from raving about this festival. It was good, just not great.

The beers that I tried with some brief notes:

Overall the festival was run well, fun, and a way to meet up with a few brewers I have talked to before but never met. It also was a great opportunity to try some really rare beers that you might not get to try any other way. I will be back for 2011. Enjoy!