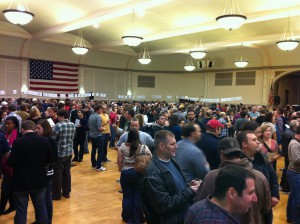 My second pilgrimage to the Festival of Wood and Barrel Aged Beer (FoBAB) has come and gone. I have some thoughts, comments, and a review of the American craft beers that I tasted, with one becoming beer #347 for my 365 American craft beers in 365 days (more to come on that).

62 breweries put their wares up for everyone to taste. 172 beers represented those breweries with many breweries bringing out the heavy hitters. I met an assistant brewer from Firestone Walker Brewing Company that was finishing up taking classes at Siebel institute. He mentioned that most of the beers from Firestone were very limited release that few people would have the chance to appreciate. Those 62 breweries were located in 22 of the states.

After going around I felt that maybe half of the beers there were represented by a handful of breweries. My perception was the beers were much more Midwest centric with some of the breweries from previous years there but not bringing as much swag. That concerns me for what will happen going forward.

The ninth annual FoBAB cost $40 for 16 tickets. This is an increase of $5 in ticket price for one more ticket over the previous year. The event sold out quickly so I would imagine the price will go up again next year non-proportional manner. Once again the amount of people allowed into the fest seemed to be perfect. There was room to move and the goers always seem to get their beers and move away from the pourers, making the experience pleasant. 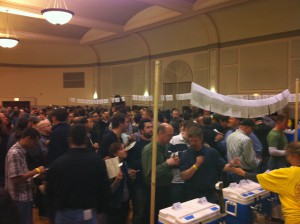 I once again attended the event with my wife and we met up with Ed and Shawn from the Tuesday Night Beer Club. The wife, being the socialite she is, found people’s ears to chew, allowing us to meet a couple of huge American craft beer fans we never knew before. The beers were fantastic, as they always are, with only one disappointing.

The beers that I tried with notes taken from the FoBAB pamphlet handed to all festival participants (in the order tasted):

I will be back for the 10 year FoBAB next year but I might be in for it solo as the wife isn’t sure she wants to go again. We use this day to celebrate our anniversary so I am hoping I can coax her into rescinding her early decision. Enjoy!

Useless Fact: Alexandre Gustave Eiffel, the man who designed the Eiffel Tower, also designed the inner structure of the Statue of Liberty in New York Harbor.