Two Bros 2nd “For the Love of Hops” Fest 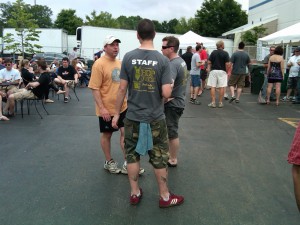 I did a drive-by of Two Brother Brewing’s Second Annual “For the Love of Hops” Fest (Sat, 6/12) on their brewery property in Warrenville, IL. While the official rationale was for the release of their Double IPA “Hop Juice”, like many craft brewers it was a loyal follower’s party with food, bands, and of course their brews…and some cool guest taps. My reason for just a quick stop was to get a couple of bombers of Hop Juice, and I was still in the dog house with the wifey from the previous day’s excursion to Chicago for the Hawks Stanley Cup celebration and an afternoon at Wrigley watching the Sox – Cubs…but I digress.

So my report on the event is admittedly based on a short stay, but I think I caught enough to provide a broad overview. First off, the Two Brothers Brewery/Pub is tucked at the back of a non-descript business park, so you need to pay attention driving in to the joint. For the Fest, there were directional signs which definately helped. The overall setup was somewhat reminiscent of Three Floyds Dark Lord Days, although on a smaller scale. Food tents, draft beer stations, portapottys all setup in the brewery’s parking lots. Although nice area of tables/chairs and a tented band stage built on top of kegs was a nice touch. Food selection was good with the standard homemade brats and burgers, but also freshly made fish tacos and pulled pork on tortillia. 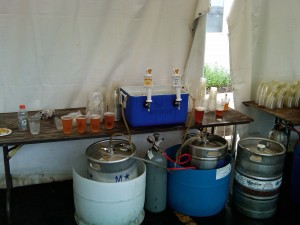 The guest beer list looked very awesome, a different keg was tapped the top of each hour. Unfortunately I didn’t have time to wait for some selections I’d really would have liked to try. Standouts on the list included Jolly Pumpkin, The Bruery, Lost Abbey, and Pizza Port…all which are tough to find on tap around Chicago.

Oh yeah, the guest of honor Hop Juice 2010 was great. Without doing a full blown review, it’s a great version of a Double IPA. This is a style that gets beer geeks going, and there are some legendary brews in this category like Pliny, 90 Minute, Hopslam, Ruination…to name a few. Hop Juice is a very respectable execution, is no copycat of the West Coast brews, in that it has it’s own personality. At 9.9% abv and 100 ibus it is very well balanced. 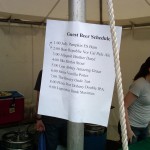 Overall, a very laid back brew event with a more subdued and adult vibe than some brew fests. Focus is on tasing great brews, both from Two Brothers and other high quality brewers. Plus the Two Brothers pub is known for great executions of pub grub, and that seemed to be the other focus. Plus four bands for live music for the entire event. I had a couple of knocks. First is the event had a spartan look, please Bros get some signage. They’ve got some great graphics on T-Shirts, just add a little color/decor to the space. And, I was a little surprised at the price a drafts. I think each brew was $6, and I think the cup sizes were 9 or 10-oz for the Hop Juice and 12 or 14-oz for the other brews. A little price break would’ve been nice…$4 or 5 brews for a twenty spot would’ve seemed more customer appreciative. But, I’d definately hit this fest again. 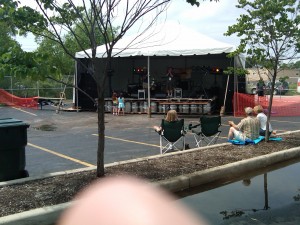