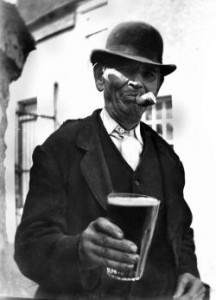 Not being a patient person, I have a hard time giving my beer enough time to carbonate after bottling. Two weeks or more, usually since the basement is only 57 degrees this time of year, is tough to deal with after waiting at least four weeks after brew day to bottle.

Sunday marked the fourteen days of bottling and conditioning for Idlewild Creek, a robust porter recipe I made up. I had take one gallon ageing it on oak bourbon chips, another gallon ageing it with a vanilla bean, and the rest was just left alone. Being fourteen days conditioned and my bourbon loving neighbor was over, I thought there would be no more of perfect scenario to try the beer than that moment.

After a bottle each, I can say the beer needs another two weeks conditioning but the oak and bourbon are nice an subtle. Miles, my neighbor, said that he would and could have gone for a much bigger bourbon presence.

Personally, I am really happy with this beer and wished that I would have added just a touch more bourbon (maybe two ounces per gallon more, which would put me in the five ounces per gallon neighborhood). I will have to try the normal and vanilla versions in the next week or so but, based on the bourbon version, I may have brewed the first batch of beer that I have liked. Enjoy!