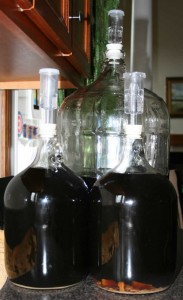 Idlewild creek home brew with one gallon with vanilla bean, another gallon with oak burboun chips, and the rest all natural.

The Robust Porter, Idlewild Creek, that I brewed on February 20th, is now in the bottle after a few hours of work this morning. The beer was in primary for two weeks as I wanted to harvest the yeast to brew this again soon. Idlewild Creek then sat in the secondary for a week, mainly for the two specials to age.

The oak, bourbon batch was pretty close to what I wanted. The oak wasn’t over powering but I did add an extra ounce of Makers to the bottling bucket to up the ante on bourbon. I had soaked about .2 ounces of oak chips in two ounces of bourbon for a week before the original racking to the one gallon carboy.

The last three gallons, which was straight forward, had a really nice roast flavor and, even flat, was damn tasty. I am looking forward to trying all three of these beers in the next three to four weeks. free run 6 v2 femmes My basement is about 56 degrees this time of year and bottling conditioning seems to be a little slower.

By the time it is ready, I should be close to bottling Double Bogey, a Russian Imperial Stout that was brewed last Saturday. Also, a two weeks from today, I should be back to brewing an IPA and, my wife likes the wheat beer I brewed and is half done with that already. Maybe it is time for ten gallon batches. 😀

The only thing I can say about home brewing: if you get the itch, it will keep scratching. Enjoy!