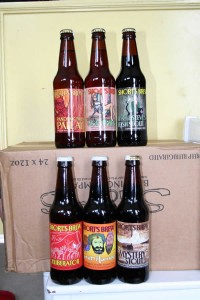 The six Shorts Brewing Company beers that we reviewed.

Shorts Brewing Company is a favorite of mine and Rich and everywhere you turn we hear good things about their beer. On my recent trip to Grand Rapids, Michigan I scored six different flavors of their, tripling the amount that we had had to this point. With great pride I invited Rich over last night to taste and review.

Here is the lineup, in the order reviewed, and a few thoughts:

The one gripe I have is the lack of information on Short’s website is void of any information about their beers outside of a little marketing blurb. At least three of the beers that we reviewed I couldn’t even find listed on their site. air jordan spizike I guess I would have to say all American micro-breweries that practice this lack of information bug me. Isn’t that part of the experience?

In Short’s defense, I did email them last night to let them know about my experience with their beers. They replied very quickly, apologizing, and trying to help with the diagnosis of why the beer might have been bad. That is some damn good customer service and why I can’t get enough of American craft beer. Enjoy!