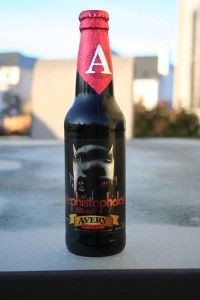 Actually found time to review three American craft beers last night. Two of them were from Avery Brewing while the third was from Barley Island Brewing Company a small brewery near Indianapolis, Indiana.

The first beer up was Dugana IPA a 22 ounce bomber of American Imperial IPA from Avery. Poured similar to most DIPAs but the aroma and taste let the malt be more pronounced while balancing a cornucopia of nice hops flavors and aromas: pine, citrus, and floral. The 8.5% ABV was well hidden while the hop bitterness was a tad big. I will look for this one each year it comes out. 8/10

Mephistophele’s Stout by Avery, an American imperial stout was the middle beer of the evening. A neighbor gave me this beer a few months back and it has been sitting in my cellar since. roshe run suede The bottle was dated November 2008, putting the beer at a smooth 13 months old. Lots of complex aromas and flavors in this beer: dark fruit, molasses, chocolate, coffee, malt, and some bourbon fire. The thickness and size of this beer turn it into a sipper to be savored. I think the beer could easily be aged another few years to allow for it to mellow. I will have to find another bottle to cellar. 9/10

The last beer of the evening was Brass Knuckles Oatmeal Stout by Barley Island Brewing Company. An oatmeal stout with a modest 4.9% ABV that has the aroma of roasted malt, oatmeal, chocolate, and ever so slight nut. The taste has some sweet up front and not really any hops while the roasted malt, chocolate, and coffee flavors come through. A really nice oatmeal stout that is well put together and very drinkable. 8/10

Bluntly stated, last night was a fun night for reviewing as all three rated eight or above. Mephistophele’s Stout was clearly the star of the evening but the other two were equally as good as each other and hard to compare based on such style difference. I will call it a tie. Each of these beers I would and will pursue in the future. Enjoy!

Rye Stout and Out Of Bounds Stout Reviewed