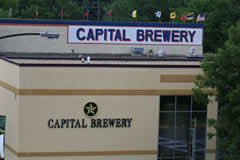 Into my pint glass I poured the first offering of the evening: Central Waters Octoberfest. A handsome beer in the glass, especially as the foam diminished and became a little frothy. Much more so than the usual Oktoberfest. Grain malt and some grassy hops fill the nose and the mouth. air jordan 13 femmes The hops are a pleasant addition. Unfortunately overall a little light making it just another Oktoberfest.

Capital Oktoberfest finished off the evening of double Oktoberfests. Another nice looking beer with a similar frothy ending to the foam. Bread malt and a touch of sweet along side some minor grassy hops. Beer has a hearty mouth feel giving it a nice body. A little more meat on its bones than Central Waters. A quality Oktoberfest beer that, if you like the style, you would most certainly appreciate.

My wife really enjoyed both offerings, due to both not being completely overwhelming to the nose or palate. Enjoy!