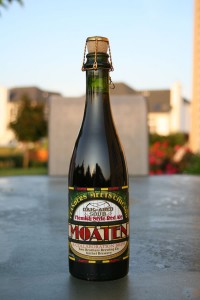 This Wednesday’s beer store visit wasn’t as eventful as most but was relaxing. I had a busy, hectic day to that point, so it was nice to take a 20 minute break and head over across the street. Travis was busy with paperwork so I couldn’t get my usual personal tour of the beer aisles but he did put off to the side a bottle of Two Brothers Brewing Co. Oak Aged Sour Flemish Style Red Ale in with collaboration with Urthel Brewery. I didn’t see any left on the shelf, so I appreciate him holding me one.

Since Travis was busy I took it upon myself to go up and down the beer aisles to see if air max 90 femmes anything would catch my fancy – please read that as cheap and/or on sale! 🙂 Didn’t take me long to find Lagunitas Lucky 13 in bomber format for $3.49. Damn good bargain.

I have had only one Lagunitas beer: Hop Stoopid and really enjoyed it. I have a couple more bombers in my fridge, so one more would make it three (yes, I have good math skills). So tonight’s meeting with Rich will have a Lagunitas theme.

Jolly Pumpkin Artisan Ales is a brewery that has interested me since I had my first, Oro de Calabaza, with Ed a few weeks back and more recently Bam Biére. So I picked up a bottle of E.S. Bam Hoppy Farmhouse Ale, which was the most expensive purchase at $9.99. I am not in love with what they do, just very fascinated and wanting to continue trying their beers. Based on their name they truly look at brewing as an art form and their beers definitely show it.

I look forward to trying all of these in the short term. Look for the reviews to be up in the next week as I have a busy weekend that will cut into my ability to review beer. Enjoy!